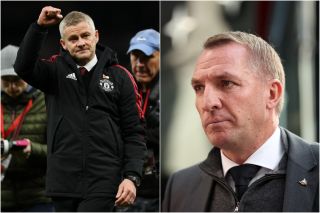 Ole Gunnar Solskjaer is weathering quite the storm at the moment and with his side in horrendous domestic form, the scrutiny on him is at an all-time high.

The drab run of results has put increasing pressure on his position at the club, with several reports linking other managers to become his replacement.

Brendan Rodgers, the former Liverpool manager, has been linked with the job and reports are now claiming that the 48-year-old has been identified as a possible replacement for Solskjaer.

That’s according to the Daily Star, who go as far as to say that Manchester United are ‘increasingly confident’ Rodgers will become Solskjaer’s successor if the Norwegian is sacked.

The confidence in bringing him to Old Trafford stems from a release clause in his contract should a Champions League club come calling for the Northern Irishman.

The Old Trafford hierarchy reportedly believes Rodgers would be keen on taking the job and although he would be reluctant to leave Leicester, he would find the chance to manage United near impossible to turn down.

Read more: Subscribe to the Stretty Newsletter for all the latest Manchester United news!

SN’s verdict on Rodgers replacing Solskjaer…
The potential appointment of Rodgers is in keeping with the hierarchy’s desire to maintain a long-term view in terms of management of the club but there are doubts over his resume.

Rodgers has done fantastically well at Leicester, guiding them to consecutive fifth-placed finishes but in both campaigns, his side has been underwhelming when it really matters and ultimately, they missed out on comfortable finishes inside the top four.

Furthermore, there is still no clarity on Solskjaer’s position at the club. Following the 4-2 defeat at Leicester last month, the club were unequivocal in their backing of Solskjaer but humiliating defeats to Liverpool and Manchester City were not followed by public backing.

Are Manchester United being lenient in their judgment of Solskjaer or has he simply been granted a stay of execution? It remains to be seen whether their decision to stick with Solskjaer is solely down to the lack of available replacements or if they genuinely believe he can turn this season around.

Heavy investments were made into his squad over the summer, with Jadon Sancho, Raphael Varane, and Cristiano Ronaldo all joining the club in high-profile transfers. So far, only the latter has met expectations.

Solskjaer will need his squad to roll up their sleeves in the coming weeks. An extension to the current poor run does not reflect well on the Norwegian and he is at the risk of seeing United’s rivals leaving them in their wake.