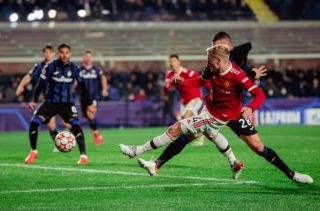 Donny van de Beek was a late substitute for Manchester United against Atalanta. He sent a defiant message to fans after the match last night and sounded happy to be back on the pitch.

With 3 minutes left of normal time on the clock, Van de Beek came on with Jadon Sancho, as Ole Gunnar Solskjaer went with his final changes of the night in hope of clinching a late goal to take a point away from Atalanta.

It was Van de Beek’s first appearance in a United shirt since the Carabao Cup defeat to West Ham in September and it made me wonder why we haven’t seen him in more games this season when United find themselves chasing goals.

He took to Instagram after the full-time whistle to post a photo from the match with a caption: “Never give up.”

The Netherlands international isn’t a goalscorer but he can make things happen on the football pitch. He’s technically superb and deserves more opportunities.

Helping make an impact against Atalanta will hopefully help him kick on and make something of his time at Old Trafford.

Solskjaer also felt Van de Beek played a role in Ronaldo’s all important equaliser, saying (via Manchester Evening News): “I think the qualities they have could make an impact tonight. Jadon was sharp, we wanted a little more width on the side because we put Edinson on and lacked a bit of that width. Bruno [Fernandes] played well and you want him out there but I felt we needed a little more width to get crosses in for Edinson or Cristiano.

“Donny provided the run for the last goal. He keeps working and he’s got qualities in there to unlock close defences and he almost scored as well. I thought all of them who came on did well.

“Jadon will come good. He has a great work-rate and attitude, he was really sharp when he came on, the first header he cleared for us and he was sharp on the ball. So they’ll all have a big role to play and he’ll have many, many years as a good player here.”

Van de Beek played well and part of me definitely wants to see him play more often, but have we crossed a point of no return, like Rio Ferdinand suggested earlier this week?

I don’t think we’ll see him feature in the Manchester derby on Saturday because the manager has too many midfielders ahead of the former Ajax man. They include Scott McTominay, Fred, Nemanja Matic and Bruno Fernandes.

He came on as Fernandes went off last night because it would be challenge to play with both players at the same time. Well, it has always been a challenge for Van de Beek, who seems to crumble whenever the Portuguese Magnifico is on the pitch.