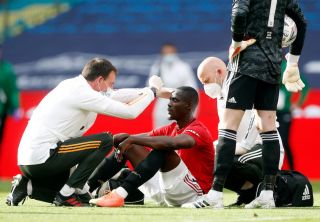 Manchester United defender Eric Bailly was stretchered off the pitch after a clash of heads with teammate Harry Maguire in the FA Cup semi-final against Chelsea at Wembley.

Bailly was fitted with a neck break and oxygen mask as the game paused for around 10 minutes as the Ivorian was treated.

The centre-back initially stood up after the collision with Maguire but was soon advised to sit down by United’s medical staff and was addressed by paramedics on the sidelines before being wheeled down the tunnel.

Bailly was replaced by Anthony Martial on the stroke of half-time as Ole Gunnar Solskjaer changed United’s failing system.

The Reds have reverted to their preferred four-at-the-back formation as a result of Bailly’s injury, with Daniel James and Marcus Rashford becoming the wide-men rather than strikers.

Chelsea took the lead just before the half-time whistle through Olivier Giroud who flicked beyond David De Gea.

Stretty News will provide you with updates as we get them concerning Bailly’s health.

We wish Eric the best and hope he makes a speedy recovery.

See photos of Bailly below, courtesy of BR Football:

Eric Bailly has been stretchered off with a head injury. Get well soon 🙏 pic.twitter.com/yZdNWiUHwO