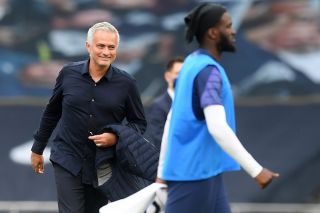 Jose Mourinho’s Tottenham Hotspur have handed Manchester United a huge boost in their race for the top four.

Mourinho’s men were rampant in their 3-0 victory over Leicester City, with Harry Kane netting an excellent quick-fire double on the stroke of half-time.

Tottenham took the lead in the opening exchanges when Heung Min Son’s shot was deflected in by James Justin.

Spurs’ victory makes United’s job in qualifying for the Champions League all the more easier.

The Reds can now afford a draw against Brendan Rodgers’ men on the final day of the season, presuming they can beat West Ham at Old Trafford on Wednesday.

United’s game against Leicester City looked all set to become a Champions League play-off, with both sides battling for victory to secure their place in Europe’s elite competition.

But the Foxes faltering again means United are now huge favourites to finish in the top four and can complete the job with four points in their remaining two league games.

Incredibly, United could also get into the top four with a defeat against Leicester on the final day, as long as they beat West Ham and have a better goal difference than the Foxes in the final two games.