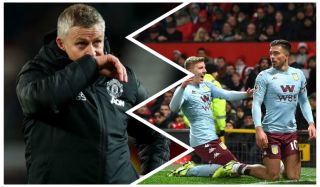 The Man Utd manager remained coy when asked if Grealish was a transfer target for the Red Devils.

Grealish scored a stunning opening goal as his side earned a 2-2 drawn with United.

With the Reds lacking in quality in the final third, it is no secret that Solskjaer needs to dip into the transfer market for creative talent, though it will be difficult to prize away a player like Grealish midway through the season. We can all agree he would be an improvement on Jesse Lingard which makes you wonder if Gareth Southgate will give the Villa attacker some caps before Euro2020.

Leicester City playmaker James Maddison is another reported target, as per talkSPORT, but we can expect claims around Grealish to grow after his display at the weekend.

But Solskjaer was not giving anything away when he was quizzed on targeting Grealish.

“I can’t talk too much about other teams’ players, if they’re Man United calibre or targets,” Solskjaer said (via Daily Express).

“But fantastic goal, I think he hit one of them corners I hit a couple of times.

“It was a great finish, but we should defend better, show him down the left.

“But what a goal and he played a good game.”

The draw meant United missed out on the opportunity to go fifth in the Premier League — and six points adrift of Chelsea in fourth. Instead we continue to miss our chances on a top four finish by dropping points from winnable positions in winnable games!

Solskjaer insists he is not looking at the Premier League table so early in the season, but we are almost at the halfway point of the season. He really should consider taking a look before we lose grips on finishing in the Champions League places.