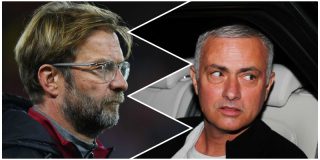 The defeat against Liverpool put the final nail in the coffin for the Portuguese tactician’s time at Old Trafford.

United lost 3-1 in dire fashion, lacking any real style and intensity, while goals from Sadio Mane and Xherdan Shaqiri gave the Scousers all three points.

The result saw United fall 19 points adrift of Liverpool at the top of the table, a truly unacceptable gab for mid-December of any season.

Jurgen Klopp had a press conference scheduled today and the media were sure to ask the German for his thoughts on Mourinho being sacked.

Klopp on Mourinho sacking: “He’s a very competitive, ambitious guy. Unbelievably successful. I can imagine the last few months were not a joy for him. Nobody can take away all the things he won.”

Rivalry or not, when it comes to football managers there are few that haven’t looked up to Mourinho.

Before getting trapped into a debate about liking his style, he’s won it all. Mourinho has been incredibly successful throughout his career and that won’t ever be forgotten.

At United, in his first season, he won the Europa League and League Cup but no more silverware followed.

The club now plans to hire a caretaker manager until the end of the current season.