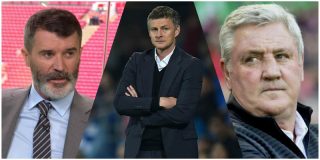 Everyone is weighing in on who they think should replace José Mourinho at Old Trafford until the end of the season, including former Manchester United player Paul Ince, who reckons Steve Bruce should be given the nod.

United are searching for someone to hold the position while they recruit a director of football and full-time manager.

Whoever becomes caretaker manager will be made aware that the job will expire at the end of the season.

Mourinho’s job became untenable after a disastrous start to the current football season. United are sixth in the Premier League, 19 points adrift of league leaders and rivals Liverpool, but have an exciting Champions League Round of 16 battle against Paris Saint-Germain to look forward to.

It’s a shock to hear Bruce’s name mentioned given he’s never managed at the top and was recently sacked at Aston Villa, but Ince argues his point via Paddy Power, as quoted by The Mirror: “If you’re picking someone for the caretaker manager, I believe they’d got to have managed previously and have a deep understanding of what it means to be at Manchester United.

“It’s got to be someone who’ll galvanize the players, and someone who the players will respect. It seems there was a lack of respect from them under Mourinho.

“They have to have the character and presence to put demands on the players, at the minute they’re seemingly doing what they like. It has to be someone who understands what it takes to turn the club around.

“If it was me? I’d pick Steve Bruce today. He’s not working at the moment, and he had seven or eight years at the club. He’s been a very good, and successful manager and he more than many understands what it’s like to be a United player. Yes, he’s been sacked, but we’ve all been sacked before.

“Whether he wants to go as a caretaker manager, I don’t know. But I could genuinely see him coming in on a caretaker basis, turning United around and being offered a full-time contract. He’s got as good a chance as anyone of doing well at the club.

“He’d be the ideal selection to steady the ship until the end of the season. He’d be able to manage the players in no time.

“Between him and Solskjaer there’s no comparison. Plus, I’d love it to be someone English, and someone who United fans through the ages immediately recognise and say ‘I remember Steve Bruce, what a player he was.’

“The only other caretaker candidate I’d choose would be Roy Keane. He’d knock those players into shape in no time, he’s managed, and he’s familiar with the club.”

As much as we love Keane, it won’t happen and he wouldn’t be the right fit for the role.

This caretaker manager needs to come in and prepare the lads for the next manager by regrouping everyone – players and fans – as well as playing attacking football.

And, Bruce wouldn’t play the right style of football either.