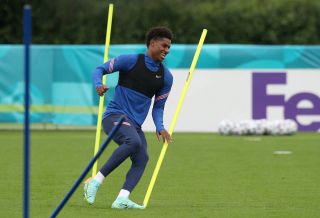 Harry Maguire has returned to action after suffering damage to his ankle ligaments six weeks ago, it has been confirmed. The Manchester United captain was named in England’s starting team for their final group game against the Czech Republic.

Maguire made a passionate case for featuring in the game on the eve of the encounter, insisting that he has fully recovered from the injury which kept him out of the Europa League final for his club.

The 28-year-old missed England’s first group game but was named on the bench for their drab 0-0 draw with Scotland last week and is now deemed fit enough to start.

Here's how the #ThreeLions line up for tonight's clash with Czech Republic at @wembleystadium: pic.twitter.com/MGMuDygqRL

Marcus Rashford, who captained his national side in their final warm-up game, has been snubbed again by Gareth Southgate and starts the game on the bench. The 23-year-old failed to start any of England’s three group games.

Luke Shaw keeps his place at left-back after his performance against Scotland and will be looking to secure his spot for the rest of the tournament, having been dropped for Kieran Trippier in the opening game against Croatia.

With qualification to the next round already secured, a win for England would see them win their group.