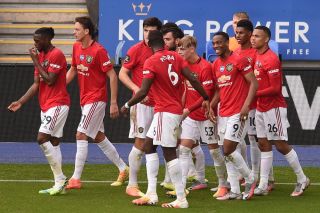 Here are our player ratings from Manchester United’s 2-0 victory over Leicester City at the King Power Stadium:

Unconvincing display from the Spaniard who provided some heart-in-mouth moments in the first-half.  Relatively untroubled. 5

Leicester allowed Wan-Bissaka plenty of time on the ball but his passes lacked any conviction. Did little wrong defensively. 5

United’s best defender throughout. Looked assured playing out of the back and dealt with the threat of the elusive Jamie Vardy. 8

Clumsy performance that embodied United’s nervousness in the opening stages. Booked early on which left him vulnerable but he improved slightly in the second-half. 5

Most positive of the two full-backs and was showed controlled aggression in defence. Filled the role of Luke Shaw well in the biggest game of the teenager’s career. 6

Lost possession in dangerous areas in a nervy first-half showing. He settled in the second-half and almost put Martial through with a glorious pass. 5 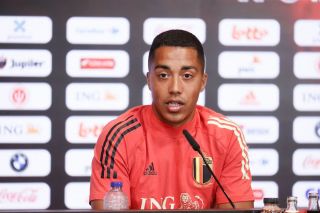 Passed prudently and looked the most convincing of United’s midfield three. Created United’s best chances in the first-half. 6

Final pass was so uncharacteristic in another weary performance. Provided the biggest moment in United’s season with the nonchalant penalty. 5

Played far too deep meaning he had little influence in the final third.  Forced a save from Schmeichel in the first-half but couldn’t make a decisive impact. 5

Brightest of United’s front three and made the run before being felled for the penalty. Showed good intent. 6

Created some good openings but struggled to find space against a resolute Leicester defence. His interception that led to the penalty decision was vital. 6

Allowed Greenwood a rest and capitalised on Schmeichel’s error to score. 6

On the receiving end of a horrendous tackle from Jonny Evans. 5 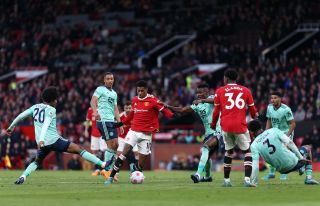