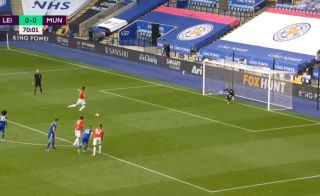 Bruno Fernandes take the lead from yet another penalty this season to take the lead at the King Power Stadium. It was Manchester United’s 14th penalty of the season – a new Premier League record.

The Portuguese midfielder has looked shattered throughout the game and some fans on social media were even calling for him to be substituted.

It hasn’t been one of his better games but at least he’s got us a goal that could secure third place in the Premier League, with Chelsea currently beating Wolves at Stamford Bridge.

Fernandes stood up to the penalty spot after Anthony Martial was fouled by Wes Morgan and Jonny Evans inside the box.

He scored with ease as seen below (footage courtesy of DAZN):