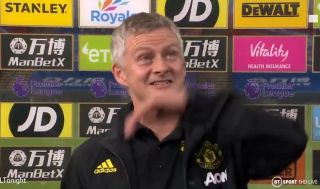 Manchester United have just secured a vital win in their pursuit to finish inside the league’s top-four as they look to secure Champions League football next season. United beat Crystal Palace 2-0 after two goals from in-form strikers Marcus Rashford and Anthony Martial.

Manager Ole Gunnar Solskjaer has given his post match thoughts after he saw his side overcome a tricky contest against Roy Hodgson’s Crystal Palace.

United managed to see out the game and win 2-0 after a goal in each half from Rashford and Martial.

However, the scoreline perhaps deceives the general ebb and flow of the match in a game which saw Palace cause the Reds problems all evening including a strong case to have been awarded a penalty.

Speaking after the game via BT Sport, Solskjaer said: “It was a tight game didn’t get the rhythm  in our passes and of course two fantastic goals that won it for us.”

When asked about Martial’s goal, the manager praised the finish and wants to see a repeat of such build-up play in the coming weeks: “Yeah, the finish was great but also the build up with some quick interchanging passing so we didn’t do that enough and they [the team] don’t do it enough because they are a handful to play against. I am glad I am not a defender playing against them. They need to trust themselves to do that more.”

Crystal Palace’s Zaha had a strong claim for a penalty right at the end of the first-half after the attacker went down from a challenge from Victor Lindelof. Giving his thoughts on the decision not to award Palace with a penalty, Solskjaer said: “I have just seen it there behind you [interviewer] and it looks like Victor [Lindelof] kicks the ball there. Nah, ball first. So it’s a tight decision. Probably the same with Anthony towards the end […] So no, I don’t think that’s a penalty.”

United now have three key goals including an FA Cup Semi Final against Chelsea within the next 10 days, addressing the Reds’ up and coming fixtures, the boss added: “Of course it’s tight scheduling but we can’t afford starts like this.”

Solskjaer ended his post-match interview by paying tribute to his side’s turn around in form: “No-one thought this in January that we were in with a shout of the top four and we’ve done fantastic since the restart so we’ve got to smile. These are the games that matter.”

“No-one thought we were in with a shout in January.”

“At Man Utd you have to stand up and show your personality.”

And he’s not having that Palace penalty shout either 😂

As you can see from the post-match interview with BT Sport above, Solskjaer was left having to bat away a flying bug before the conversation with Des Kelly concluded.