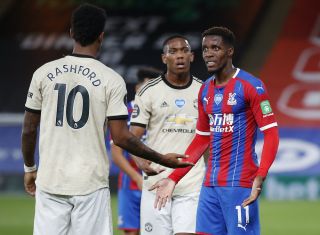 Although it was nervy for the most part of tonight’s game against Crystal Palace, Manchester United came away from Selhurst Park with three points thanks to goals from Marcus Rashford and Anthony Martial.

Prior to this season fans were concerned about Manchester United in the final third. We just sold Romelu Lukaku and let Alexis Sanchez leave on loan — both to Serie A side Inter Milan — and nobody came in to cushion the blow of losing two experienced attacking players.

It was time for Rashford and Martial to stand up, though neither of them had racked up a tally of 20+ goals in one season.

That soon changed and we now talk about two young players with incredible ability who are proving their critics wrong. And as a combination they are becoming a formidable force.

According to Opta, Martial and Rashford have assisted one another a combined seven times in the Premier League this season. No pairing in United’s history have such a record in the competition.

7 – Anthony Martial and Marcus Rashford have now assisted one another a combined seven times in this season’s Premier League, the most of any pairing in a single season for @ManUtd in the competition. Wavelength. pic.twitter.com/s0uZRIYJZK

Throw Mason Greenwood into the mix and you’ve got a front three who will terrify defenders, as well as Odion Ighalo on the bench, so there is a lot of be excited about as a United fan. The question is can they continue scoring and ensure United win their remaining two league fixtures to clinch a top four spot and qualify for the Champions League.

Next up is Chelsea in an FA Cup semi-final at Wembley.