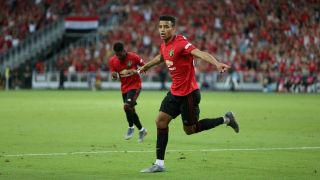 Manchester United are unbeaten from their tour in the far East this summer. Four wins from four should be enough to fill the players with optimism ahead of the new campaign, but we still have two pre-season friendlies to play first.

Next up for Ole Gunnar Solskjaer’s men is a trip to Kristiansund, which is the perfect opportunity for the manager to field his younger players before the competitive season begins. He could use it as a way to get a look at them as a group together, or at the same time he might want to start getting his team ready for the first game of the season against Chelsea.

But we’re up against weaker opposition making it the ideal scenario to see more of the teenagers and academy graduates in action.

In goal, Joel Pereira deserves an opportunity to prove his worth, after going on two loan spells last term. New signing Aaron Wan-Bissaka has been excellent on tour thus far and will start tomorrow evening, while Luke Shaw is likely to take up the opposite flank at full-back. Then a centre-back pairing of Axel Tuanzebe and Victor Lindelof to finish off the defence.

Scott McTominay has been super during the pre-season friendlies and could have a big season in him yet. He appears to have gained a solid understanding with Paul Pogba, who should start alongside the Scotland international. And, Angel Gomes deserves to take the No.10 role for this one.

Solskjaer has been keen to give his new signings as many minutes possible in these friendlies, so I expect Daniel James to start on the left, with Mason Greenwood coming in on the right. The two wide players will support United’s main man up front this season Marcus Rashford, though Anthony Martial will be aiming to challenge for that role unless he settles for the left wing.