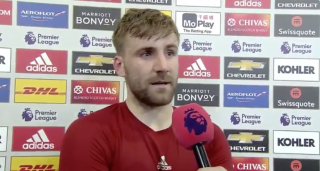 The Reds were nowhere near their best but did enough to cross the line and prevent what would have been a major upset in the race for top four.

United still have a grip on finishing in the Champions League places to qualify for next season’s tournament, which must be the main objective between now and the end of the season.

Speaking about the performance against Watford, Shaw told BBC Sport: “We made it harder with the way we played. There were times when we weren’t at our best.

“We were awful in the second half, we were lucky with the result. The most important thing is the three points.

“We had a few chances but we didn’t take them. We need to get ourselves together again and focus on Wolves. We want to go there and get the win.

“I’m always confident when Rashford’s in front of goal, he likes to get in behind, it was a great finish and great composure.

“We need to forget about the game today because we were not at our best at all.

“We feel really good and confident, and fully trust Ole, and we’re looking forward to working with him for the years to come.”

Shaw was responsible for a stunning assist when Marcus Rashford netting the opener. Ole Gunnar Solskjaer previously went public about wanting to see his left-back attack more by getting further up the pitch and we’re now seeing the results.

Luke Shaw has now provided as many Premier League assists this season (3) as he managed in his previous five combined.

It’s been Shaw’s best season at United and we hope he can develop into a world-class full-back.

“He’s shed a few pounds, the manager is on his side, he’s back to his best”.

It looks like Luke Shaw has got his confidence back.