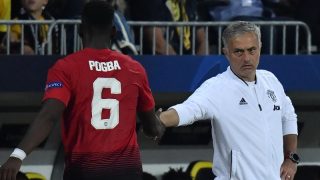 Jose Mourinho has fired a powerful message of warning to Paul Pogba after the Frenchman was stripped of the vice-captaincy this week.

The midfielder hit out at Manchester United’s approach during their 1-1 draw with Wolves last weekend and was subsequently told by the boss that he would never wear the armband again.

Then footage emerged the following day of Mourinho having a frosty dispute with Pogba on the training ground over an Instagram post published during United’s defeat to Championship side Derby County in the third round of the League Cup.

Speaking to the press on Friday, the 55-year-old stressed that nobody was bigger than the club and hit out at Pogba for his attitude.

Jose on Pogba
“I’m happy with his work this week, really happy, Tuesday, Wednesday and Thursday especially because today was not so significant but he trained really well.
“Nobody trained better than him, some trained as well, and tomorrow he plays, so end of the story.”

As seen above, Mourinho also confirmed Pogba will start against West Ham.