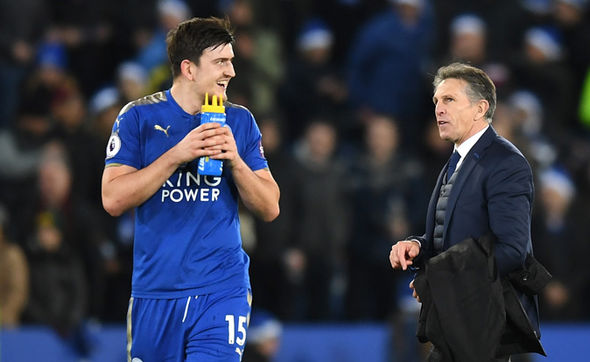 Leicester City manager Claude Puel is confident that his centre-back Harry Maguire will not leave this summer, despite significant interest from Manchester United. The 25-year-old has been linked along with Toby Alderweireld as Jose Mourinho’s top targets this summer with the United manager looking to reinforce in central defence. It is believed any deal for Maguire would cost in excess of £65m.

Maguire impressed at Leicester last season picking up the player of the season award after a £17m switch from relegated Hull. However, the World Cup this summer was the Englishman’s breakthrough on the world stage. Maguire helped England reach their first tournament semi-finals since 1990, as well as scoring in the quarter-final against Sweden. His confidence in playing out of the back and leadership skills were highly praised, traits which Mourinho would understandably desire in a centre-back role.

READ MORE: On this day in 2006: Carrick signs for Man Utd from Tottenham

However, it now seems unlikely that Mourinho will get his man with Puel confident the 25-year-old will stay at Leicester. “I am confident about the presence of Harry for this season. He is a very good player for us,” said Puel. “I was not surprised about his performance during this World Cup. We saw his progress during the second half of the season.”

With under two weeks of the transfer window to go, this could come as another blow to Mourinho, who has previously stated he had given Chief Executive Ed Woodward five names to sign at the start of the summer. United’s only summer signings so far are Brazilian midfielder Fred, third choice goalkeeper Lee Grant, and young Portuguese defender Diogo Dalot. Both the manager and United fans are now becoming increasingly frustrated at the lack of business done by the club.

United face Leicester in the first game of the season next Friday and it is looking increasingly likely that Harry Maguire will be wearing the blue of Leicester City, not the red of Manchester United.