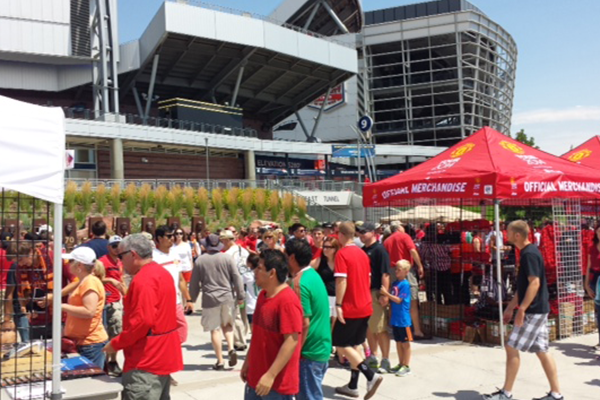 Louis van Gaal has cojones, big cojones. Yet, far too many are looking up to him as a savior before Manchester United have even begun their season. Van Gaal should be looked up to in regards of his no-nonsense approach to football, but this shouldn’t be reveled in. Instead, van Gaal’s appointment was what United needed from the get-go to uphold the arrogance put forth by nearly all successful managers – and yes, quite a few which aren’t deserving of the title of Football Manager as well.

The United States welcomed Manchester United and AS Roma to the mile-high club. Wait, that’s wrong. Whether it be the Rocky Mountains, the wonderful trails of Aspen or the sheer magic of Sports Authority Field in Denver, Colorado it was the European clubs who put on a show in United’s second preseason match. Sam Johnstone took the liberties between the posts, and while all goalkeepers will likely see action on the United States tour, it is quite important to note how much of a rock Johnstone was for Doncaster last season.

Following a 7-0 thumping of the LA Galaxy, Louis van Gaal opened the second match on United’s tour with a catastrophic decision which nearly burst Twitter into smithereens.

The world nearly erupted when Manchester United announced on their official Twitter it would be Tom Cleverley who would wear the captains arm band against AS Roma. And while this may come as a surprise for United supporters, it the choice isn’t overly shocking. Cleverley, at one point or another in his career, has been lauded by the likes of Gary Neville, Ryan Giggs and even Roberto Martinez for the style of play. Certainly, his style may not fit the English game, and Louis van Gaal could very easily just be waiting until Robin van Persie returns to the squad to hand him the captains arm band permanently, but this could be the gentle kick in his backside to perform – or he’s out.

As United took the pitch in the standard 3-5-2 formation under van Gaal, the probability for Cleverley to continue his fine preseason form would be readily apparent. And as United wore their new away kits for the first time (a kit which is quickly growing on me), Cleverley looks to be making ground quickly after falling out of touch the past few seasons, when his downfall began in the spring of 2011.

We will not even try to sugar coat the first 35 minutes of the match. Utter slow for the reds as AS Roma controlled the midfield and were content with playing long balls to Mattia Destro, who did on numerous occasions slip behind the United defense. With a few jarring empty seats in Denver, United looked to lag behind the Italian side, looking frail on defense. Then, out of nowhere, Wayne Rooney took a ball fed from Juan Mata and with a quick two touches on the ball, rocketed a laser into the far corner of the net. Often, Rooney does not shoot enough from beyond the 18-yard box, but with his belting strike, I’d imagine plenty more to come.

Clearly, AS Roma were the better of the two squads until Rooney’s strike, which turned the match on its head. Not even three minutes later in the 39th minute, it was Juan Mata who took down a 30-yard ball from Rooney perfectly with his left boot, chipped the onrushing goalkeeper, off the near post and in.

But United did not slow down, as Wayne Rooney made it 3-0 to the reds courtesy of a penalty kick. Danny Welbeck was impeded in the area by Emanuelson, and Rooney immediately stepped to the spot. And there weren’t many more questions to be asked of him. Captain material? Absolutely.

As the second half was underway, it was the reds who looked the superior of the two clubs in the attack. Will Keane and Ashley Young linked up on numerous occasions, but Keane could not find the back of the net. It was Maralem Pjanic for AS Roma that did bring Roma back to within two goals, as the midfielder notched a sublime goal from his own half in the 75th minute over Ben Amos.

With plenty of changes in the second half, Louis van Gaal’s men definitely were thrusted into adapting to higher altitudes and temperatures. As the match continued on, it was quite apparent each player was lagging behind on both clubs. Though we must remember only two matches into the preseason, United appear on the right track to avenging their seventh place finish in the Premier League last season.

It was then In the 89th minute, AS Roma put themselves within one as Francesco Totti powered the Italian squad from the penalty area. Totti’s penalty was converted following a hand-ball in the penalty area, forcing the American referee to point to the spot.

Though Manchester United would finish 3-2 on the afternoon in Denver, Colorado, and Wayne Rooney a clear Man of the Match, Chris Smalling’s second half performance was quite telling in and of itself. With Rafael out with injury, Smalling has certainly added a pep in his step on defense along with a bit of calmness when class players run in his direction. Though he isn’t in the Rio Ferdinand mold as of yet, Smalling has all of the qualities a premier footballer needs, but whether he remains as an outside back or a centre back remains uncertain.

With that, Louis van Gaal’s men are now a perfect 2-for-2 in preseason matches, something a bit quite different than 12 months ago in Asia. Onwards and upwards, to United’s next preseason match in Washington, D.C. against former ankle breaking, Serbian giant of Nemanja Vidic and Inter Milan.

Meanwhile, Dale and Serge broadcasted a live Hangout an hour after full time. The pair reviewed not only the win over AS Roma, but LA Galaxy also. In addition they answered numerous questions about the tour thus far and Manchester United’s summer business.

Featured picture was sent in by SN reader Justin DeCouto, who was in attendance. Kudos.