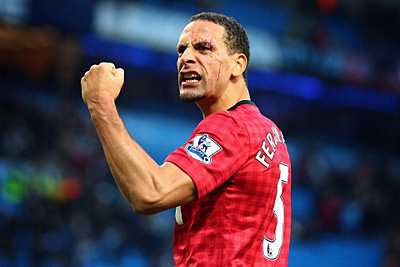 The old maxim that has stood the test of time “the best way to respond to criticism is to let your football do the talking” has surely not been epitomised greater in recent years by the revival and blossoming of Rio Ferdinand. After that 1-6 journalists, who for so long had waxed lyrical over one of the best centre-backs England has ever produced, claimed that he was over the hill and could no longer stand up to the ever increasing ferocity and speed of the Premier League juggernaut.

Up to the point of that cataclysmic defeat, Ferdinand based his game on a high defensive line, knowing with full assurance that his pace could rescue him if caught up the field. Ferdinand was lightning in his pomp, around the time he formed one of the best modern day centre-back pairings with Nemanja Vidic. The media had a field day after seeing us get battered by that lot, leaving Ferdinand hanging out to dry, focusing him as the villain of the piece, the scapegoat of the disaster.

The manager made no bones about the fact that Ferdinand needed to find new strategies and adapt accordingly in order to prolong his stay at United and add to the special service he has given us over the years.

What followed this appraisal was nothing short of sublime from Ferdinand. It is one thing getting a roasting from the media, but Ferdinand would certainly have heeded the words of the manager, someone you listen to. With this flea in the ear, Ferdinand’s name on the team-sheet became even more paramount given the injuries at the back last year: Nemanja Vidic, Chris Smalling, Phil Jones and Rafael all fell foul of the injury demons. Ferdinand, with a new-found clean bill of health (probably due to the adaptation in his game, putting less stress on his body), remained a constant in the defence in the latter stage of the season. A natural leader and winner by trade, Ferdinand produced arguably some of the best football of his career, helping bring out the best in Jonny Evans, another defender who has turned the corner and turned heads in recent times.

Ahead of the season, Ferdinand targeted featuring in 30 games this season. A few years ago people may have questioned such a meagre total given that United feature in probably twice this amount going for trophies on all fronts. This is a seemingly more mature Ferdinand, one who knows what his body can now handle, knowing if he pushes himself too hard his body may say ‘enough’ and in the blink of an eye that would be his curtain call. Thus far, Ferdinand is well on course to achieving the feat he forecast himself.

One thing that United have certainly been the beneficiaries of has been his rather messy and frosty exit from the International scene. Big Woy preferred John Terry (for football reasons obviously) over Rio, despite Rio playing in more games than the Moscow slipper and looking more assured. Besides, this enabled Rio to put his feet up and come back for this season’s onslaught refreshed and reinvigorated, as a result we have seen some quality performances. Too late now Woy.

The ABU’s and tabloids were electric in dishing out fresh waves of criticism towards Ferdinand after our surprise home defeat to Tottenham. Again, Rio was branded ‘finished’ and a ‘pensioner’ after Gareth Bale did him for pace to score. What a crime that is! Sue him, he got done by one of the fastest in world football. The problem and general consensus when you put in a poor performance at that age is that you are automatically judged as finished, it is up to the player to let the media eat their words.

Over the years, we have seldom seen Rio put in two shoddy performances in a row, proving that after a bad day at the office you know you will get an improved effort the next week. As a result, he masterminded a rare clean sheet at the time away at Newcastle United, a game we needed to win because at the time we were slacking a little and looked vulnerable. Ferdinand was momentous at the back, of course winning several plaudits from the fickle written press the next day.

This uncanny ability to produce when the spotlight is firmly cast on you highlights two significant traits that set him apart from most:

Firstly, his knack of churning out class performances after criticism is a worthy indictment of the ‘never say die’ attitude that is firmly ingrained into the core of the Manchester United DNA. The mentality to never know when you’re beaten not only on the pitch but also physically is testament to the man and a symbol of our club.

Secondly, Ferdinand’s continued presence in the hub of the defence indicates what a priceless commodity having that experience. It is a ‘money can’t buy’ quality that is essential for sustained success (you only have to look at Aston Villa’s current plight as evidence).

Ferdinand’s longevity can also be attributed to the ultimate man manager. The manner in which Sir Alex controls and handles the players in their twilight- when to play them, when to give them a breather means there is no reason why Ferdinand cannot keep producing at the highest level for a couple more seasons, as Ferguson has previously maintained. Look at the recent renaissance of Ryan Giggs on the left-wing- subject of copious amounts of flack when deployed in central midfield, a return to the wing where he made the grass burn with his speed has seen us take a trip down memory lane- it’s been simply a delight to watch Giggs and Ferdinand in recent weeks.

Twitter was in raptures over Ferdinand last night after he contributed to a hard-fought, gritty, determined 1-0 win at Fulham, a precious win. He marshalled the troops looked a man possessed, driving the defence on to stay focused and keep the ball out. Ferdinand’s mentality, for all his supposed brashness and swagger off the pitch, is a clean sheet is as good as a goal. He brought out the best in Jonny Evans and David De Gea, who has been given a rough time in the press (has Martin Samuel blamed him for the power failure yet?)

Last year will have hurt Ferdinand more than any, he knows time is not on his side and he wants this title back more than anyone seemingly. Consequently, his determined and dogged defending in bringing the best out of those around him, hardly surprising we have looked more solid collectively in recent weeks.

If Ferdinand is well controlled and stays healthy (touch wood), his presence will not only have a lasting and hopefully rewarding effect this season, but he will surely be rewarded with a new deal and take this on into next season.