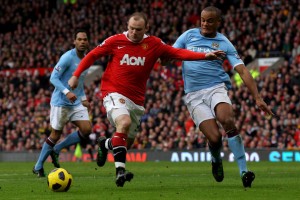 This weekend, United welcome City to Old Trafford looking for nothing less than three points to take them ahead of their rivals and back on top of the Premier League. Roberto Mancini’s men are sitting uncomfortably at the top just one point head of the Reds, who remain unbeaten winning 6 out of 8 games (20 points).

Manchester United have a 100% record at Old Trafford this season beating three Top 6 sides – Tottenham (3-0), Arsenal (8-2) and Chelsea (3-1). We’ve also beaten newly promoted side Norwich 2-0, at home. Manchester City, on the other hand, have only dropped 2 points away from home in a 2-2 draw with Fulham. They have, however, been impressive on the road with victories at Bolton (3-2) followed by big wins against Tottenham (5-1) and Blackburn (4-0).

The Blues reached the top of the table for the first time this season, when United dropped 2 points away at Liverpool and they beat Aston Villa 4-1 at home. However, they don’t have many reasons to get giddy, just yet. United and Chelsea are still on their fixture list…

As impressive as United have been at home this season, City have matched that on their travels. They have attempted and completed more passes than United, and are as almost matching them in goals scored. They have averaged more possession away from home than United have at Old Trafford, suggesting that the midfield battle on Sunday will be crucial to the result. Both teams will want to get on the ball and pass it around. You feel whoever does this best will come away with a result.

Overall against the Stockport boys, United have a very good record winning more than half and only losing 18% of the games. The record at Old Trafford is similar, only losing one back in 2008.

We have won the last three league encounters against City, producing many memorable moments. In 2009, Michael Owen wrote himself into a folklore legend with an injury time winner.  Last year, Wayne Rooney produced a goal that will never be forgotten as we picked up another 3 points.

Wayne Rooney, after being dropped for the game at Anfield, came back in the midweek Champions League win with two goals. He has scored 11 in 10 games, in all competitions, this season and will be looking to add to his list this weekend.

Rooney has a good record against City, and has never lost to them at Old Trafford. He will be looking to score in his 3rd consecutive league derby at Old Trafford and continue our winning streak.