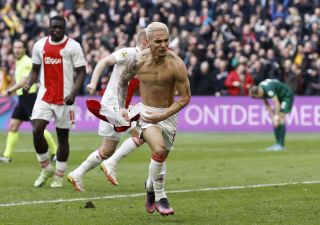 According to Fabrizio Romano, United are not the only club interested in signing the Brazil international, but new manager Erik ten Hag is understood to be pushing for the player.

Antony situation. Manchester United are really interested and already had contacts to explore potential deal – not the only club, but with ten Hag pushing. 🇧🇷 #MUFC

Been told player’s camp now asking Ajax to listen to bids for Antony this summer, even if price tag will be high. pic.twitter.com/OELd3cxASi

Ten Hag wants to bring Antony with him to Old Trafford and managing him at Ajax. Back in May, when he still held the responsibilities as Ajax manager, the Dutch coach warned that they would find it difficult to replace the attacker.

He told De Telegraaf (via Goal): “If Antony were to go, it would be a loss for Ajax, because you have no one in the current selection who can take over his position.”

It’s clear from that he rates Antony, but Romano’s update is the biggest suggestion yet that United are making moves to sign the player. The fact there’s competition for his signature may give United the urge they need to complete a deal for the first time this summer.

Ajax may find themselves in a stronger negotiation position than the beginning of the market. While it is not a club that needs to sell players, they’ve already sold a few and I suspect the rest will be kept unless they’re able to maximise profits on the likes of Antony and Lisandro Martinez.

Moreover, Antony has a contract at Ajax until 2025.

The other clubs interested in Antony were not named in Romano’s tweet, so more updates when we have them.