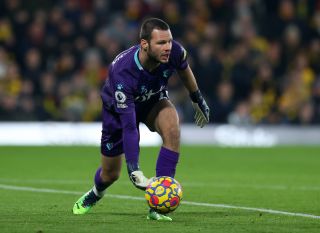 Manchester United are in talks over a shock swoop for Watford goalkeeper Daniel Bachmann.

According to Fabrizio Romano, Watford will only let the Austrian leave on a permanent deal, and he’s among options for United to replace Dean Henderson as David de Gea’s number two.

Henderson is set to join Nottingham Forest on a season-long loan.

Romano tweeted: “Manchester United are in talks with Watford to sign Daniel Bachmann as 2/3 goalkeeper. Watford will only consider a permanent deal.

“Bachmann, among options for Man United to replace Dean Henderson who’s one step away from joining Nottingham Forest as revealed last week.”

Manchester United are in talks with Watford to sign Daniel Bachmann as 2/3 goalkeeper. Watford will only consider a permanent deal. 🔴 #MUFC

Bachmann, among options for Man United to replace Dean Henderson who’s one step away from joining Nottingham Forest as revealed last week.

Bachmann, however, has already confirmed there has been contact from United.

He told Sky Sports Austria: “There has been contact with Manchester United. It hasn’t just fallen out of the sky. I don’t know whether the team boss [Rangnick] has a say in transfer matters.

“Several clubs have shown interest in me – but the most intensive contacts have come from Manchester. It is a massive honour for a club like that to be interested in you.

“I would be second choice behind David de Gea, who has been one of the Premier League’s best keepers for years.

“But anything can happen in football. The performances principle applies. As a result, even big stars can sit on the sub’s bench.”

Meanwhile, it doesn’t sound like Tom Heaton will be trusted as the only back-up keeper with experience. That said, the former Burnley shot stopper has been linked with a move to Championship outfit Middlesbrough.

At 27, it makes you wonder why an international keeper like Bachmann would settle for games in cup competitions, even if it’s to say he played for a club like United.

I guess the same was often said about former United keeper Sergio Romero, who was part of the Europa League-winning side in 2017.

Is Bachmann the younger alternative to Lee Grant we’ve all been crying out for?

Maybe there is more to this because Bachmann was linked with a move to Ajax last year and a lot has been said about how demanding Erik ten Hag tends to be with keepers.