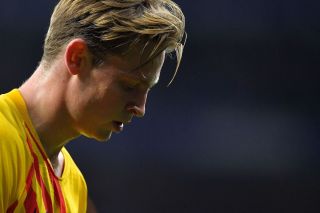 Manchester United’s pursuit of Frenkie de Jong is rumbling on and the latest reports suggest that Barcelona are sticking to their guns with their high valuation of the 25-year-old.

De Jong has been earmarked as Erik ten Hag’s number one target this summer to reinforce United’s midfield, with United already light in that area following the departures of Nemanja Matic, Paul Pogba, Juan Mata and Jesse Lingard.

Discussions are dragging on, however, with United hoping to reunite De Jong with Ten Hag at Old Trafford. Now, there are suggestions that the club is reluctant to move forward with any other deals before completing De Jong’s transfer.

That’s according to The Telegraph, who add that although the club have been gauging Ajax winger Antony’s interest in moving to Old Trafford, they are waiting for a breakthrough in the De Jong deal before advancing any other moves.

In addition, it’s claimed that Ten Hag would like up to five new players this summer, with a right-back and a centre-half also on the agenda. Phil Jones, Eric Bailly and Axel Tuanzebe could all leave the club, with United ready to listen to offers for the outcast trio.

SN’s verdict…
United are not working with an unlimited budget this summer and the lack of Champions League revenue will have dented their ability to strengthen the squad this summer.

Clearly, sealing a deal for De Jong remains the number one objective and the club’s reluctance to move forward with other deals could be because they’re not quite sure how much they will need to pay for De Jong quite yet.

Either way, signing De Jong will take up the majority of United’s budget and other marquee signings could be dependent on whether there are any significant sales. As things stand, it’s not looking likely that United will generate much cash flow through departures.

Six players have already left on free transfers and although that frees up space on the wage bill, United would ideally like to sell some of their assets to top up their spending power.