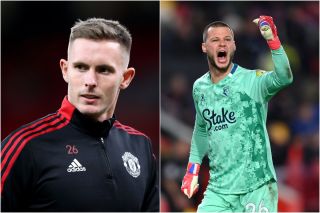 Manchester United goalkeeper Dean Henderson is closing in on a move to Nottingham Forest, according to reports. The newly-promoted club are on the hunt for a new first-choice goalkeeper and Henderson is on the verge of joining Steve Cooper’s side.

Henderson made just three appearances in all competitions for United last season, with none of them coming in the Premier League, leaving his future at Old Trafford in the balance.

According to CaughtOffside, the loan agreement which will see the 25-year-old join Forest is now being finalised but there will be no option to buy the player at the end of the season-long arrangement.

As per the report, only fine details remain and they are currently being discussed, with decisions to be taken on who will be paying what percentage of his wages during his time at Forest.

Henderson’s imminent departure has left United light in the goalkeeping area, with Lee Grant also leaving upon the expiry of his contract next week.

Tom Heaton was signed on a free transfer last year but the veteran keeper is not believed to be a serious contender to be David de Gea’s backup.

Instead, United are now considering a move for Watford shot-stopper Daniel Bachmann to replace Henderson, who is managed by former Reds boss Ralf Rangnick on the international stage.

That’s according to Goal, who add that the goalkeeper is available for £4m and that the Old Trafford hierarchy are keen to bring in an experienced figure to support De Gea.

Bachmann, who made 12 Premier League appearances for Watford last season, believes he can establish himself as the cup goalkeeper at United.

SN’s verdict…
United will hope that this one is wrapped up quickly, with even the smallest of transfer capable of turning into sagas at Old Trafford.

Clearly, United need to replace Henderson if he leaves and Bachmann would be an able understudy, having had experience as both a first and second-choice goalkeeper.

At £4m, it could prove to be great value for money but it all hinges on whether Henderson completes his move to Nottingham Forest. As things stand, it’s looking very likely.