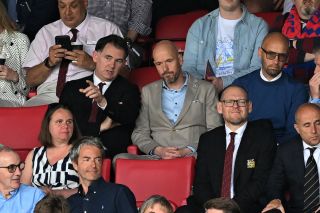 Erik ten Hag is just days away from leading his first pre-season in charge of Manchester United, with the first group of players due back on Monday to prepare for the new campaign.

The build-up to Monday’s regrouping has largely been about transfers, with a midfielder high on Ten Hag’s wishlist. United are locked in talks with Barcelona over Frenkie de Jong whilst Christian Eriksen has also been linked.

Earlier on Wednesday, it was reported that Ten Hag would like to sign a centre-back but it has now emerged that United must sell one or more of their outcast assets before that wish is granted.

That’s according to the Manchester Evening News, who add that although Ten Hag would like to add able competition to Harry Maguire, signing a centre-back is dependent on bringing in revenue through sales.

As per the report, Eric Bailly and Phil Jones are already looking to leave the club and Axel Tuanzebe could also depart but his situation is described as ‘delicate’.

None of the three aforementioned players have managed to establish themselves as first-team regulars at United and moving them on could be integral to the club’s chances of improving the defence.

SN’s verdict…
United conceded 57 goals in the Premier League last season – their worst record since the competition was formed in 1992. And although that is more down to the lack of structure in the team rather than the quality of players, it’s still obvious that defensive reinforcements are needed.

The lack of Champions League football looks to have seriously hampered United’s spending ability in the market and Ten Hag will be desperate to trim his squad down in order for new faces to be brought in.

As things stand, United have six senior centre-backs on their books and only three are thought to be serious contenders under the Dutchman.

Earlier this week, it was suggested that Ten Hag could be getting ready to hijack Arsenal’s bid to sign Lisandro Martinez from Ajax, who was a regular under United’s new manager at the Amsterdam club.