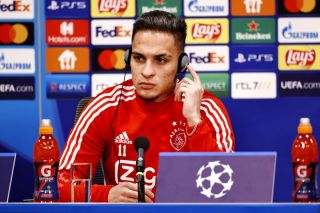 Manchester United are quietly making progress in the transfer market and have recently initiated talks with Ajax over Antony, their star winger.

The Brazil international was one of Erik ten Hag’s most used players at the Amsterdam club last year and is now reportedly a target for the Dutchman at Old Trafford.

Earlier this week, it was reported that United officials were due in Amsterdam to negotiate a deal with Ajax over the winger, with a £40m deal thought to be on the agenda. Now, United have been handed another boost in their pursuit of the tricky winger.

According to Goal, Antony is ‘determined’ to join United this summer and reunite with Ten Hag. As per the report, informal talks have been held with Antony but no official bid has been submitted yet.

Ten Hag wants to add firepower to his side, with the departures of Edinson Cavani and Jesse Lingard denting his options whilst Mason Greenwood’s situation remains a stumbling block.

The 22-year-old was reportedly identified as a summer target in a meeting with United officials earlier this summer and has now made it clear that he would like to move to Old Trafford.

SN’s verdict…
As things stand, United have just three senior players for the two wide attacking positions, with Marcus Rashford and Jadon Sancho being the two first-team regulars. Outcast forward Anthony Martial could also play there but there are question marks over his future.

Ralf Rangnick promoted Anthony Elanga to the first team but he is only 20 and United’s other options, Facundo Pellistri, Amad Diallo and Alejandro Garnacho, are all teenagers.

You could see exactly why Ten Hag is desperate to add another winger to the ranks and Antony certainly fits the bill. In the past, Ten Hag has wanted a left-footed winger on the right flank and vice versa.