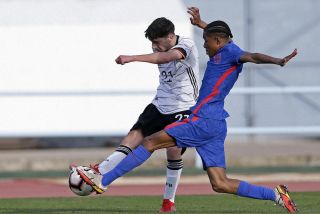 Manchester United are working on a deal to sign Tottenham Hotspur youth player Jayden Meghoma, according to reports.

Caught Offside claims United believe a deal is close which means the 15-year-old is set to join the academy ahead of next season.

Last season our U18s won the FA Youth Cup and several players have been tipped for a bright future at Old Trafford, including Alejandro Garnacho and Hannibal Mejbri.

Now it seems like United want to strengthen their academy teams by bringing the best young players in the UK to Manchester.

Tottenham have produced some brilliant players down the years, and they won’t want to see a promising left-back like Meghoma leave so early in his career.

He has played at international level for England U16s and will hope to develop into a first team player in the coming years.

We have questioned United’s recruitment strategy down the years, especially at first-team level, but John Murtough did a lot of good work to get the youth system back on track.

Richard Arnold will want Murtough to achieve the same at first-team level.