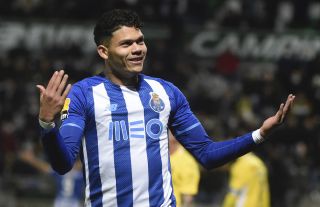 As things stand, Cristiano Ronaldo is the club’s only out-and-out striker heading into pre-season and that has led to an influx of reports linking Manchester United to a number of strikers.

Darwin Nunez, the former Benfica star, was believed to be one of the club’s prime targets but were left red-faced when he ended up joining Liverpool instead.

Frenkie de Jong has emerged as the summer’s number one priority, with the club remaining in talks with Barcelona over a transfer fee.

Recently, Porto star Evanilson has been linked with a move to United, with the Portuguese club potentially set to lose their prized asset this summer. The Brazilian scored 14 goals in 30 league appearances last season, which seemed to have piqued the interest of some European sides.

Fabrizio Romano, the journalist and transfer specialist, has now rejected that idea, insisting that United have not made an offer for the forward.

Manchester United have not submitted any bid to FC Porto for Brazilian striker Evanilson, despite rumours of €70m proposal turned down. He's not in Man United list as of today. ⛔️🇧🇷 #MUFC

Antony, discussed internally with ten Hag. Evanilson, not a topic.

As per the Italian journalist, Evanilson is not believed to be on United’s list of targets this summer, with the 22-year-old described as ‘not a topic’.

Elsewhere, it has been suggested that United have put deals on the back burner until they find a resolution to the De Jong saga, with a willingness to complete that deal before advancing other moves.

SN’s verdict…
As mentioned by Romano above, the suggestion of a €70m bid seems ludicrous at this point considering Evanilson averaged less than a goal every other game. In comparison, Nunez scored 26 goals in 28 games and joined Liverpool for €75m, according to Transfermarkt.

United’s need for a striker is obvious as it’s unlikely that Ronaldo will be able to feature every week but the Old Trafford club’s hunt for another forward will go on.

The possibility of Anthony Martial staying at the club has been talked up in recent days, which could mean that United put off signing a new striker. Marcus Rashford is also capable of filling in centrally.