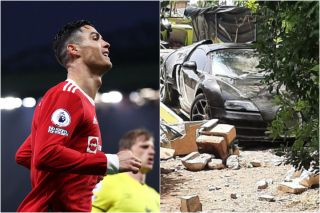 Earlier this week, it emerged that a vehicle owned by Cristiano Ronaldo had been involved in an accident in Majorca. A £1.7m Bugatti Veyron registered to the 37-year-old’s name had crashed into the house of one of the residents.

Ronaldo was not believed to be inside the vehicle when the accident occurred, with one of his employees thought to be operating the luxurious motor.

The driver is said to have lost control of the car before crashing into a stone wall connected to a house but no one is believed to have sustained any serious injuries.

The homeowner affected by the freak incident has now spoken out on the bizarre mishap, admitting that he made his way to Ronaldo’s property, which is in close proximity to the crash site, to seek clarity on the matter.

Furthermore, he has revealed that Ronaldo has offered to pay for all damages.

“I had to wait for a while for the door to be opened [when I visited Ronaldo] but I was met by a very polite man and woman,” the homeowner told Ultima Hora, according to The Mirror.

“On behalf of Ronaldo they promised to pay all the damage the Bugatti had caused. They told me to get everything fixed and keep the invoices… My water meter was ripped out in the accident and since then I haven’t been able to live normally in my own house. The door flew off its hinges and two concrete columns were knocked down.

“I was working when the police told me about the accident and the first thing I thought was that my dog had been killed because it is always behind the door. When I entered the property I saw him shaking with fear a fair distance from the entrance.”

Luckily, no one was hurt and it’s a mere inconvenience for all parties involved. Ronaldo is expected back at Manchester United next month as he prepares to spearhead the Reds’ attack under Erik ten Hag.