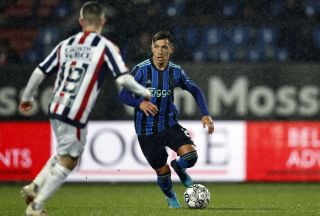 Over the past couple of the weeks, since the transfer window opened, it has been reported that Manchester United are interested in signing a number of players from Ajax.

I can’t help but think – as someone who only wants the best for United – that Ajax should at least give Ten Hag a proper goodbye present by helping him as he starts his quest to make the biggest club in England a dominant force again.

Netherlands starlet Jurrien Timber was tipped as the primary defensive signing. A talented 20-year-old who can play a range of positions, including centre-back, right-back and centre-back.

But that deal looks deal in the water and United fans have took aim at Louis van Gaal for interfering with his former club’s transfer plans.

However, Antony and Lisandro Martinez are two other Ajax players who have been heavily linked with moves to United – and neither of them has any reason to listen to Mr Van Gaal.

Simon Mullock of The Mirror claims Ten Hag may have to choose between one of Antony or Martinez to sign from his former club; unless United make excessive offers that Ajax deem too good to turn down.

Ajax are also set to sell star striker Sebastian Haller, with the German striker linked with a move to Borussia Dortmund, and United should try to get their business out of the way before the Eredivisie champions lose more key players.

Mullock writes: “Ajax don’t need the money. They are Champions League regulars again and are about to sell former West Ham striker Sebastian Haller to Borussia Dortmund for £30million, having already raised £16.6million when Ryan Gravenberch joined Bayern Munich. Munich also snapped up Noussair Mazraoui on a free transfer and Ajax do not want to hand new coach Alfred Schreuder a squad that has been stripped bare.”

Antony could be the right winger we’ve missed for years and the same could be said about Martinez in a defensive midfield role, although the Argentine featured as one of Ten Hag’s regular centre-back last season.

Let us know in the comments section which Ajax player you would most like to see at United next season?