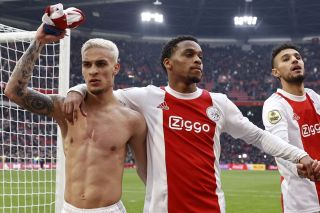 Ajax do not intend on selling Antony for a cheap fee. It sounds like Manchester United will need to offer more than the £40m that was previously reported by the mainstream media.

In a recent report by Mike Verweij via Telesport, the Dutch journalist said Ajax are not going to sell the Brazil international for anything below €70-80m. He also spoke about United’s interest in Lisandro Martinez and Jurrien Timber – but none of it is good news.

Verweij said: “There is a lot of interest for Martinez, Antony & Timber. Especially from Man United. But it’s almost ruled out that they will leave Ajax due to their price tags. €70M up to €80M for Antony. €50M up to €60M for Martinez & Timber.”

Erik ten Hag is understood to want to bring Antony with him to Old Trafford, but it will not be straightforward because the Eredivisie champions are not in a position where they need to sell.

The situation is different at Barcelona when it comes to Frenkie de Jong, who has become United’s primary target in this transfer window.

Martinez and Timber appear to be the defensive targets he has in Amsterdam. If it’s a choice between the two, surely Ten Hag will do all he can to convince the 20-year-old Netherlands international that he will get minutes ahead of Diogo Dalot and Aaron Wan-Bissaka.

Which of the Ajax trio do you want most at United next season?