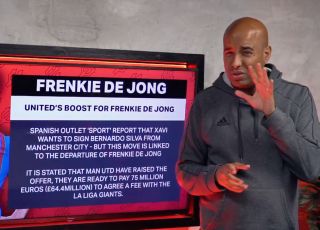 Jay is on his own in the studio for Paddock Live as he looked at all the latest Manchester United news and transfer rumours.

Of course, Fabrizio Romano’s update on Frenkie de Jong will get everyone talking, although it’s not the breakthrough we all want.

United need to decide whether to pay the €86m that Barcelona want or to walk away and seek other targets.

Not signing De Jong, however, would come as a blow to Erik ten Hag who has made the midfielder his prime target this summer.

Some might ask whether Martinez could come in as our new defensive midfielder – but he is being targeted as a centre-back instead?