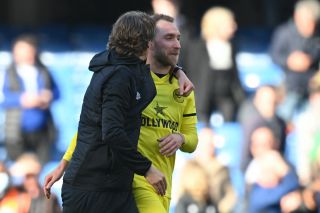 Manchester United have made Christian Eriksen an offer to become one of Erik ten Hag’s first signings.

It is understood that the Denmark international, who becomes a free agent next week, is ‘mulling’ over offers after his former club Tottenham Hotspur distanced themselves from a transfer.

That is according to The Times and it is noted that neither Eriksen nor his entourage have yet to give any indication on a preferred destination.

It is suggested that Spurs didn’t hear anything from the player’s camp for the past two weeks, while Brentford are in the dark over the Dane’s plans. In a recent interview, Thomas Frank, who met with Eriksen for dinner in Denmark last week, admitted that there was no clarity thus far.

“I do not know,” Frank told AS (H/t Sport Witness). “I know we still have a chance and I hope he will make a decision in two weeks. The agreement is that he will call me and tell me what he wants to do. He hasn’t decided yet.”

We’re sure Frank will try to spark his charm but hopefully the prospect of a new chapter at Old Trafford proves too good an offer to turn down because I would really like to see us sign Eriksen.

Hopefully Ten Hag can win him over in the coming days.

The Times article, co-written by Paul Hirst and Gary Jacob, states: “Eriksen had previously intimated that he wanted to play in London next season as his family is settled in the English capital. That led to him being linked with Spurs, but their interested has now cooled.

“United hope that Erik ten Hag’s relationship with the player will help persuade him to move to the North West.”

United need to get some midfielders in the door this summer.

We’ve lost a bunch of midfielders — Nemanja Matic, Paul Pogba, Juan Mata and Jesse Lingard – despite already coming to the realisation that no matter who we’d play in the middle, the opposition would completely overrun us.

That’s why it’s important to sign quality and Eriksen would be a great bit of business to get over the line as a free transfer.

Eriksen trained with Ajax last year during his recovery from the cardiac arrest he suffered at last summer’s European Championship.