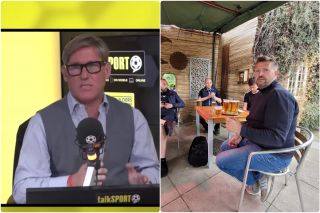 Former Crystal Palace chairman Simon Jordan has criticised Manchester United chief executive Richard Arnold for being “stupid” after a recent meeting with fans at a pub was leaked online.

It was clear from the footage that Arnold was being secretly recorded by a fan attending the meeting and lots of videos surfaced social media throughout the weekend as a result.

However, in this day and age, Arnold would need to be either stupid or naïve to think he wasn’t being recorded. That is why I thought he was actually in full performative mode on Saturday afternoon when I watched all the footage.

Speaking to talkSPORT, Jordan hit out at Arnold for his exchange with the fans, though we shouldn’t lambast him for that because the last thing fans want is to be ignored.

“If I’m a Manchester United fan I’m going to go straight back over the fence and say, ‘The Glazer’s took £1.5billion in interest payments over the last 15 years and dividends, why didn’t they stop taking that and then they wouldn’t need to go to funders to build a stadium’.

“Roman Abramovich was absolutely going to fund a stadium at Chelsea through borrowing money, everybody thinks he was going to build that stadium with his own money, no he wasn’t, he was out in the market place trying to raise funding.

“There’s nothing wrong with borrowing money but, in the space Manchester United are, the United fans are going to go straight back and say, ‘You’ve taken £1.5bn in interest over the 17 years you’ve been there, servicing a debt that you should have never placed on this club in the first place’, so I do understand their premise.”