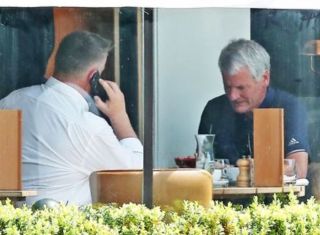 Arnold, who replaced the departing Ed Woodward in February, met with fans at a nearby pub on Saturday.

While Arnold was praised for meeting with fans by former Liverpool defender Jamie Carragher, Simon Jordan said it was “stupid” as he hit out at the United chief on talkSPORT.

The biggest difference we can see from the two meetings is that Gill hasn’t leaked any footage across social media – and we can only imagine what they discussed during their meal.

Gill, 64, spent 16 years at United – 10 as chief executive – and it is understood that Ed Woodward never looked for advice from his predecessor, despite acting like a fish out of water whenever it came to football matters (as you would expect from a banker).

It makes sense for Arnold to ask questions if he has any doubts about his new job. He will be found out if he is caught with a blindfold over his eyes.

It would be intriguing to hear Gill’s response to Arnold meeting with fans over the weekend.

Just because he wasn’t one for facing the heat after the takeover in 2005.

Unlike Woodward, Gill stopped interaction with fan groups right up until he left his role in 2013.

That’s not to say he isn’t a well-respected individual in the football world.