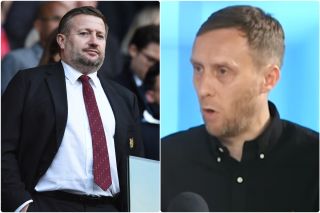 Mark Ogden was very good on the latest episode of The Gab & Juls show.

Gab Marcotti and Julian Laurens are brilliant in their own right but neither of them really understand the situation at Manchester United.

For starts, Laurens questions why Richard Arnold was so open and honest with fans about his feelings without knowing about the lack of dialogue there has been between the club and fans since the Glazer takeover in 2005.

We are also sick and tired of the lies.

In the discussion caught on camera below, the ESPN FC panel discuss Arnold’s comments on leaks from the dressing room, but ultimately the club must accept that every top club experiences this.

It shouldn’t be an excuse for shortcomings on the pitch.

For instance, Real Madrid won the UEFA Champions League this season and I am sure they had leaks throughout the season.

Laurens initially questions why the fans would protest at Arnold’s house and suggestions he has only been at the club for 3 years.

We would strongly advise Laurens to do more research on Arnold’s role with the Glazer family down the years before it pops up as a podcast topic again.

Mark Ogden brings some common sense to this episode when it comes to United chat.