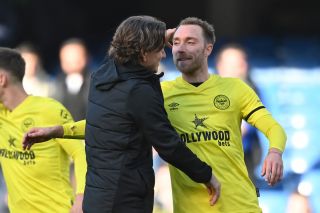 Christian Eriksen is one of Manchester United’s midfield targets this summer, with the Danish international believed to have been made an offer from the club.

Eriksen is a free agent after signing a six-month agreement with Brentford in January but his impressive return to football has sparked the interest of several big clubs.

Naturally, Brentford are keen on keeping him in London but United are also hopeful of adding him to Erik ten Hag’s new-look squad this summer. Last week, it emerged that both Eriksen and Frenkie de Jong are targets this summer.

Thomas Frank, the Brentford manager, has now admitted that Eriksen has not made a decision on his future yet and holds out hope that one will be made within two weeks.

“I never had any doubts that he would come back to a good level and now I hope we can retain him,” Frank told AS, via Sport Witness.

Further pressed on Eriksen’s future, Frank admitted that there is no clarity thus far: “I do not know. I know we still have a chance and I hope he will make a decision in two weeks. The agreement is that he will call me and tell me what he wants to do. He hasn’t decided yet.”

SN’s verdict…
Nemanja Matic, Paul Pogba, Juan Mata and Jesse Lingard have all left the club on free transfers, leaving United very light in midfield. Ten Hag will be keen on filling that gaping hole and Eriksen would be a quality addition.

United will also hope that Ten Hag’s relationship with Eriksen helps them in their cause – the midfielder trained with Ajax last year during his recovery from the cardiac arrest he suffered in the European Championship.

Bruno Fernandes, the club’s only creative spark from midfield, would also benefit from having another player in his position capable of carving the opposition open. United have been over-reliant on Fernandes for too long and that has visibly taken its toll on the Portugal international.