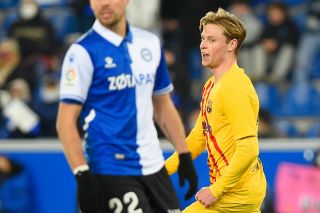 Has Frenkie de Jong signed yet?

No and we expect this transfer saga to drag on another while.

Manchester United have made it no secret that their prime target this summer is De Jong, but Barcelona are acting like firm negotiators who aren’t desperate for a cash injection. Except every man and his dog knows that isn’t the case.

The question is whether the suits at United will read Barcelona’s request as a bluff and play the waiting game. To be fair, it’s all they’ve done since the transfer window opened. I don’t know where they get the patience from.

We’ve learned in recent days that United are preparing a second bid after an initial offer was turned down by Barcelona.

However, after direct talks between the two clubs today, Fabrizio Romano understands there is still no agreement on the fee.

Barcelona have told United that they won’t sell the Netherlands international for less than €86m and they want the full fee guaranteed.

Manchester United and Barcelona have been in direct contact today for Frenkie de Jong. Still no agreement on the fee, as Barça told Man Utd they won’t sell FdJ for less than €86m. 🚨🇳🇱 #MUFC

Let’s wait and see if one of the British hacks has something on United’s version of events later tonight.

Let us know in the comments section if United should give in to Barcelona’s demands and get Ten Hag’s man?