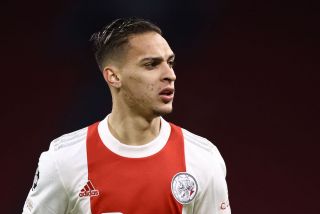 Manchester United are being heavily linked with a move for Ajax winger Antony.

Reports suggest United figures are aiming to try and get a deal over the line after flying to Amsterdam this week for talks with the Eredivisie champions.

Antony played a key role in Ajax’s success last term with 12 goals and ten assists in 33 games, although they missed him towards the end of the season due to injury.

In a farewell message to Ten Hag after his departure from Ajax, Antony posted on social media: “I want to thank you for everything you taught me. Know that I will always stand with you if you need me.”

The Red Devils are hoping to sign the Brazil international for £40 million, which doesn’t quite add up following a recent claim from Dutch magazine Voetbal International, suggesting that Ajax will only sell the player for an ‘insanely high’ amount.

Antony is among Erik ten Hag’s top targets this summer and he will want to link up with his goal threat before the new Premier League season gets underway. That also means it’s for pre-season predictions with crypto sports betting: Premier League winners, top four, bottom three and who will go all the way in the Europa League?

However, on the transfer front, Ten Hag hasn’t quite got his way just yet because United have not yet signed a single player in the transfer window. The focus appears to be on Barcelona midfielder Frenkie de Jong but, surely, a club like of United’s size can negotiate more than one deal at once?

Maybe not and that is why fans are frustrated about delays and incompetence every year.

United should be looking to sign Antony before Ajax sell Sebastien Haller because that would leave Borussia Dortmund in a position where they would have to pay a premium for the German striker.

Ajax have already lost Ryan Gravenberch to Bayern Munich this summer and they will want to make as much money possible if the squad is going to get stripped by wealthier clubs in the transfer market.

United could avoid paying an excessive fee for Antony by not letting the saga drag on all summer and getting a deal done quickly.

It’s about time United pressed on with other targets because we will be left with egg on our faces if the De Jong deal collapses.