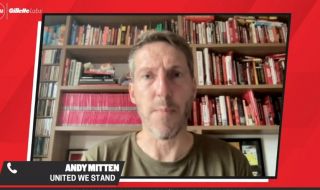 Andy Mitten featured on Off The Ball like he usually does to provide updates on matters relating to Manchester United.

In a recent appearance, the United We Stand editor makes a very interesting point about United fans.

The fanbase is so fractured.

You can tell with a quick scroll through social media that there is a lot of tension, a lot of people who think they’re right and a lot of opposite thinking people who are wrong as a result.

Mitten doesn’t just make these observations through social media. He travels across Europe to watch football for work and luckily he gets to follow Manchester United as a result.

🗣 'It's basically millions of groups of mates who think they're right – and everyone else is wrong!'

🔴 @AndyMitten comments on the many factions of fans within the #MUFC supporter base with a slew of conflicting opinions | #OTBAM@GilletteUK | #EffortlessFlow pic.twitter.com/KXRzFpDWl2

Footage courtesy of Off The Ball

We have many fan groups who want the same thing but they can’t agree with how it can achieved. Some talk to one another, other don’t.

Some fans like to seeing new transfers announced, while others prefer going to games with their mates regardless of the result.