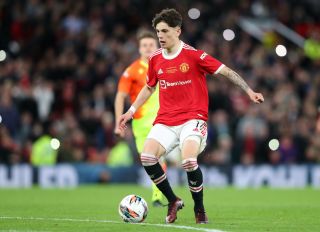 Alejandro Garnacho’s rise to prominence has attracted interest from Real Madrid, according to reports.

The 17-year-old enjoyed a breakout season with Manchester United at U18 level with 14 goals and six assists across all competitions.

Garnacho, who has been tipped for a first-team role under new manager Erik ten Hag, was part of the FA Youth Cup-winning side last term before going on to collect the Jimmy Murphy Young Player of the Year award.

Reports this summer already suggested that Serie A giants Juventus were interested in a move for Garnacho when his contract expires at United next year.

In Spain, the same has been reported about Real Madrid, as per DefensaCentral.

Madrid are said to be watching the Argentina youth international “very closely” but there are also other clubs keeping an eye on his situation at Old Trafford.

In March, the forward received his first call-up to the Argentina first team for World Cup qualifiers, which gave him the fascinating experience of training with Lionel Messi.

The Mirror claims that Argentina manager Lionel Scanloni is already excited by the potential of Garnacho and his feelings are matched by some of the stars in the team.

We hope to see United agree a new deal to keep Garnacho before it’s too late.