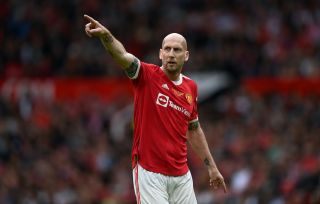 I think that much is obvious to anyone who watched United regularly last season.

To make matters worse, it has been a frustrating summer for United fans so far, while other Premier League clubs are trying to get business done early.

I’m sure United would love to be able to boast about already having a deal completed for a player, but it sounds like they are focused on agreeing a deal for Barcelona midfielder Frenkie de Jong.

After all, landing the manager’s targets is John Murtough’s number one job this summer.

While Stam was previously tipped as a potential candidate to join Ten Hag’s coaching staff, that doesn’t seem to be on the agenda right now, but he still gives interviews and talks fondly about his former club.

Speaking to the Guardian, Stam said: “We all know what he can do and what he has done over in Holland with Ajax. Hopefully he can do the same now with United.

“Obviously, there are certain things that will need to be there for him to help him, maybe in terms of different players and personnel. But I think he’s done a good job in Holland.”

He also believes that United need to make changes to adapt to the way Ten Hag wants to play football.

“At United, one of Fergie’s [Sir Alex Ferguson] qualities was bringing players in of a certain ability who could do things well in their position; then if they go well together, you’ve got a chance of doing very well. He got the right players for the right positions.”

Let us know in the comments section if you would like to see Stam back at United in a coaching capacity?