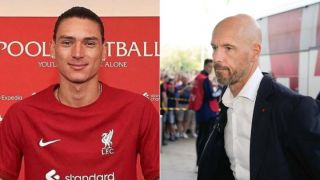 Just when you thought you had heard the last about Manchester United’s apparent pursuit of Darwin Nunez, who recently joined Liverpool from Benfica in a £85m transfer, it seems there’s another snippet to the tale.

United looked at Nunez this summer but they never made a formal offer to Benfica. The only club that went that far was Liverpool, so it would be silly to suggest they beat anyone to his signature.

So, why did United appear to drop their interest in Nunez?

According to The Athletic, United were due to meet Benfica president Rui Costa to negotiate a potential deal.

It was around the time Costa and his family were ill with food poisoning after celebrating his birthday.

However, once the meeting got postponed, United suits were ‘unconvinced’ and took it as a ‘snub’.

“Before Liverpool’s quarter-final with Benfica – where Nunez scored in each leg – Manchester United had arranged to meet Benfica’s president Rui Costa to discuss a deal but Costa and his family suffered food poisoning celebrating his birthday,” Simon Hughes and Adam Crafton wrote in a joint piece.

“With the meeting postponed, United officials needed some convincing and may have taken it as a snub.

“It did not help United that new manager Erik ten Hag, who likes Nunez a lot having seen him score against Ajax in the Champions League, was not appointed by the time Liverpool started to gain headway in their pursuit.”

This one might make you laugh because it’s not far off the infamous fax incident that prevented David de Gea from joining Real Madrid in 2015. Many believe that De Gea would’ve joined the La Liga giants if it wasn’t for a broken machine.

It was clear once the transfer window that De Jong was United’s main transfer target – not Nunez – and there’s no way we would have signed both ahead of the new season.