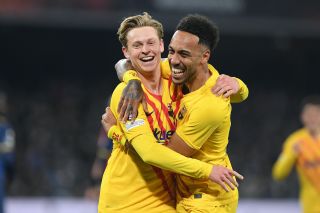 It’s a new day. Manchester United are still waiting to hear a second bid has been made to sign Barcelona midfielder Frenkie de Jong.

Barcelona are in desperate need to money, especially if they wish to register new signings this summer, and De Jong holds to key to an immediate cash injection.

According to the Guardian, United feel there is no need to panic about De Jong’s transfer, because his present club needs to sell. John Murtough and Richard Arnold will not be rushed into their pursuit of the player and are preparing a second bid of approximately €70m plus variables for the Netherlands international.

Jamie Jackson writes: “The ideal outcome is that De Jong’s signing will be sealed before United fly to Thailand for their pre-season tour on 8 July. Ten Hag wants the 25-year-old in place for what would be his first match in charge, against Liverpool in Bangkok four days after United arrive in the far east.”

The Guardian’s MUFC correspondent adds: “The mood emanating from United is bullish in regards De Jong’s arrival, the belief firmly being that it is a case of when not if.”

Barcelona have already turned down an offer from United worth €60m plus bonuses for De Jong.

With the financial problems that exist at Camp Nou, how are they going to manager to sign Robert Lewandowski from Bayern Munich or Bernardo Silva from Manchester City? They are just two of the names that Barca have been frequently linked to over the past few weeks.

This is real life rather than FIFA or Football Manager, so you can’t simply change a few settings to sign Jules Kounde as Ronald Araujo’s replacement.

Moreover, Barcelona must be aware of United’s strong negotiation position when it comes to De Jong and we can only hope it’s only a matter of days before they give.

The last thing we want is to be played by Barcelona and for De Jong to remain at Camp Nou ahead of next season. Murtough and co left with egg on their face while United’s rivals take the rest, only to mean Ten Hag has to settle for scraps.