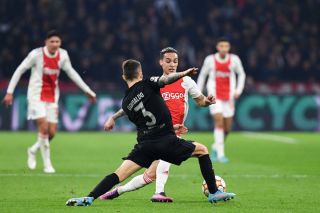 Manchester United are closing in on their first major signing of the summer, according to reports.

No, it’s no Frenkie de Jong, but Ajax winger Antony who won two Eredivisie titles during his time with Erik ten Hag.

The Sun understands that Manchester United officials are due in Amsterdam on Tuesday to complete a £40m deal for the Brazil international.

According to Neil Custis, Ten Hag wants his former player to start his rebuild at Old Trafford in a bid to make the Red Devils a competitive outfit again.

The Dutchman will be tasked with guiding United back into the Champions League, while the squad must endure a season of Europa League first after a disappointing sixth-place finish in the Premier League last term.

Antony is one of a few players Ajax will struggle to replace if he leaves this summer. The 22-year-old registered 12 goals and 10 assists in 33 games across all competitions.

It seems ridiculous that we have to wait for Frenkie de Jong before pursuing other deals, but that is a pure sign that Ten Hag doesn’t money to throw around the transfer market.

Surely, John Murtough and co can get Antony over the line this week?

Let’s be proactive for once.