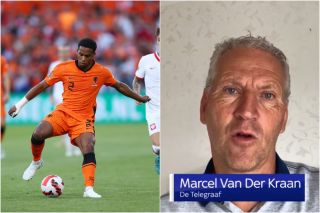 Ajax defender Jurrien Timber has been heavily linked with a move to Manchester United this summer, with the 21-year-old tipped to follow Erik ten Hag to Old Trafford.

Timber is believed to be one of Ten Hag’s prime targets but United’s new manager has now been dealt a heavy blow, with Dutch journalist Marcel van der Kraan confirming that Timber will not be joining the Reds.

Speaking on Sky Sports, as seen below, Van der Kraan admitted that United’s deal to sign Timber is ‘dead in the water’ and highlighted Louis van Gaal’s influence.

“Absolutely dead in the water,” he said on the deal. “The player was ready, I think, to come. His agent went over to London, to Manchester United’s offices, two weeks ago.

“I think they had very good talks, money was never a problem. But then one man turned up – Louis van Gaal. (He) told the player, in the Dutch camp, ‘Look, if you go there, I think your chances could be limited for playing for Holland in the World Cup three months later’.

“For Jurrien Timber, a great Ajax style player, a Ten Hag style player, that was a big of a blow that Louis van Gaal made it clear that he would not be in his Dutch team if he wasn’t playing every week for United.”

Timber’s stance is understandable and Van Gaal’s continuous attempts at sabotaging United is getting out of hand, with the former Old Trafford boss warning Ten Hag against taking the job earlier this year.