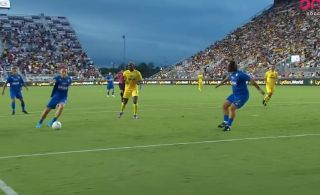 Paul Pogba will leave Manchester United for a second time this summer after running down his contract, but you won’t find many fans calling for him to stay.

Pogba’s official departure from United was already confirmed this summer – along with 11 others –after six years at Old Trafford.

However, in a recent charity match – American and Canada’s answer to Soccer Aid — a host of legendary names took to the field.

NBA legend Steve Nash got a run and so did some active footballers like Pogba, Paulo Dybala and Nani.

A personal highlight from the game came when 48-year-old NBA legend Nash touch a brilliant first touch inside the box to round Pogba before hitting the back of the net.

GOAL 🇨🇦#NBA legend and @BrooklynNets coach STEVE NASH robs Paul Pogba before applying a perfect finish to give his team an 8-4 lead!@YorkUtdFC… he is *technically* a free agent 👀#CanMNT | #NetsWorld | 🔴 https://t.co/7JFAUhgjL6 pic.twitter.com/1Xm6wAlPKy

Footage courtesy of One Soccer

Pogba was left flat-footed by a 48-year-old NBA coach.