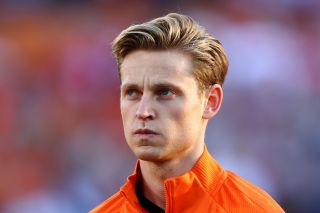 We know that another offer will go in for Frenkie de Jong.

The delay is frustrating fans because it is clear that De Jong’s transfer will take a hefty chunk out of the club’s transfer kitty – before any players are sold — and then the new manager will be tasked with identifying the right targets with the remaining funds.

As you could imagine, we’re not the only ones running out of patience with the board, with The Athletic claiming that new manager Erik ten hag is ‘frustrated’ at playing the waiting game to get his primary target.

Manchester United’s initial bid was turned down by Barcelona but reliable journalist, Fabrizio Romano, claims it is a ‘serious possibility’ that the Red Devils submit a new bid in the coming days, with talks still ongoing.

Manchester United are discussing internally about submitting a new proposal for Frenkie de Jong in the next days. It’s a serious possibility, while talks with Barça are still on. 🚨🇳🇱 #MUFC

It’s clearly an important signing to get over the line if Ten Hag has told De Jong that the whole game will revolve around him, being the reference in midfield, as per Marca.

United should get the deal over the line but we wouldn’t be surprised if it dragged on.

Preferably, De Jong is announced as a United player before the team returns for pre-season training.