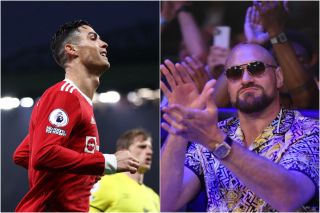 Cristiano Ronaldo received much of the plaudits for his goalscoring towards the end of last season, having found the net 24 times in his first season back at Manchester United.

18 of those strikes were in the Premier League but the Portuguese superstar had to face intense criticism at times as well, with some suggesting that his arrival is the reason for United’s dramatic turn in form.

Boxing legend Tyson Fury, who retired after his most recent fight, has now provided his own theory on why United went from challenging for the title to a measly sixth-placed finish.

“It’s good news Ronaldo is staying on, but here’s a theory: when they didn’t have him the season before last, they finished second in the Premier League, then we had Ronaldo and we finished sixth,” Fury told The Mirror.

“People will say, ‘Well, if we hadn’t had him scoring 20 goals we’d have finished a lot lower last season’, but we didn’t the season before and we finished a lot higher.

“When you have a superstar like Ronaldo, everybody relies on him to score goals and if he wasn’t there they’d be scoring the goals themselves, like they did the season before last.

“I’m not saying he’s a bad asset, he’s a great asset, but sometimes with a star player, he carries the team and the young people are overshadowed by it all, they don’t get their chance to shine because ‘the great Ronaldo’ is on the pitch.”

SN’s verdict…
There’s no defending United’s disastrous 2021/22 campaign but their faltering form was due to a perfect storm, with several things affecting the team’s performance.

It can’t be laid on one person and in fairness to Ronaldo, he was one of the few players to actually put in an effort in the last couple of weeks. United’s failure to resemble a functional team was not down to the profile of their striker. It was down to a broken team.

Three managers in one season didn’t help either, with Rangnick’s six-month stint largely undermined by his interim status. Erik ten Hag has far better circumstances facing him and fans will be desperate for the Dutchman to get it right.