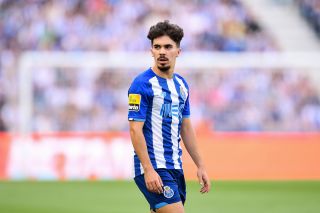 Midfielders are high on Erik ten Hag’s wishlist this summer and despite links to Frenkie de Jong and Christian Eriksen, recently it has been suggested that Porto midfielder Vitinha is on the club’s radar.

The 22-year-old has enjoyed an impressive campaign with the Portuguese club and their club president fuelled rumours earlier this week when he confirmed that an offer had been rejected for the former Wolves star.

He did not specify who the offer had come from but now, Ten Hag could have been dealt another blow in the transfer market as Vitinha is closing in on a move to Paris Saint-Germain.

That’s according to journalist and transfer specialist Fabrizio Romano, who says that a €40m fee was agreed between the two clubs.

SN’s verdict…
Vitinha, a versatile midfielder, showcased his talents at Wolverhampton last season and it was fairly obvious to see why Ten Hag would have been keen to bring him to Old Trafford.

Earlier on Saturday, Ten Hag was dealt a huge blow after it emerged that Eriksen was likely to stay in London rather than join Manchester United.

And with United continuing to haggle with Barcelona over a transfer fee for Frenkie de Jong, his first summer in charge has not gotten off to the best start.

The Dutchman will hope that this early hiccup is not a sign of things to come and that movements will intensify ahead of the start of pre-season, with the first group of players due back at the club on June 27.