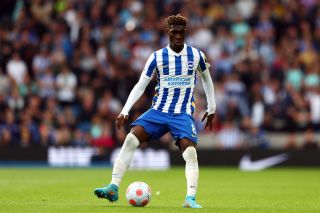 Manchester United have not signed an out-and-out defensive midfielder since Nemanja Matic joined the club in 2017 and fans are desperate for one to walk through the doors at Carrington.

Brighton midfielder Yves Bissouma has been sporadically linked with a move to United for a couple of years, with the midfielder’s agent confirming that the Old Trafford club held an interest in 2020.

With one year remaining on his contract at Brighton, it became increasingly clear that a move was likely this summer and Tottenham Hotspur ended up securing his signature.

Now, it’s being reported that United made last-minute contacts with Bissouma, with United making a check call before his transfer to Spurs emerged.

That’s according to The Athletic, who add that Bissouma was not seen as a serious candidate by United. Frenkie de Jong, over whom United are locked in negotiations with Barcelona, is the box-to-box midfielder Ten Hag is desperate to sign.

SN’s verdict…
Bissouma certainly fits the profile of player United fans have been longing for and there are some sections of supporters who will be disappointed to see him join a direct rival. De Jong, a quality player in his own right, is not an out-and-out defensive midfielder and United are in dire need of one.

Nevertheless, the Mali international has joined Tottenham but it does feel like a missed opportunity. Ten Hag will have a plan in place and perhaps he didn’t fit into that.

Supporters will hope to receive more clarity on other midfield targets next week, with their pursuit of De Jong reaching a decisive phase.